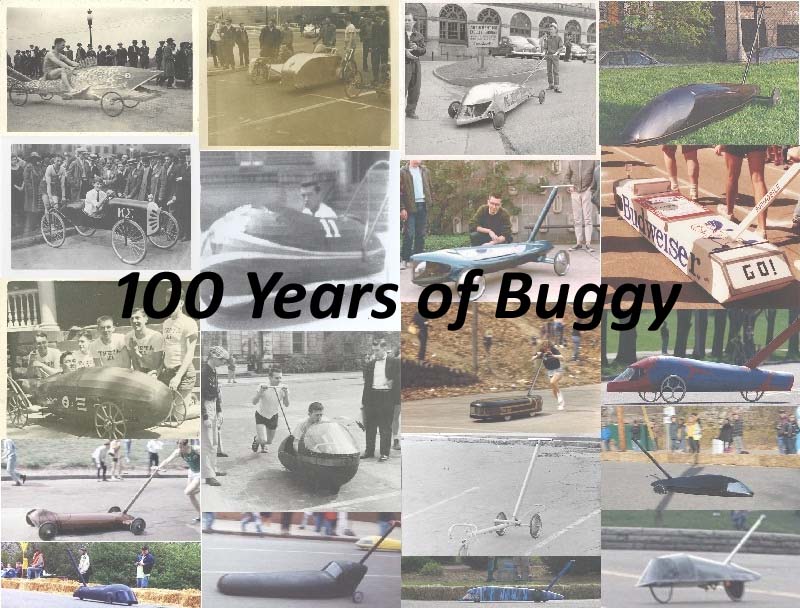 For those of you who haven’t been refreshing this site every 5 minutes since Raceday 2019 ended, this year is the 100th anniversary of Buggy at Carnegie Mellon!  This year’s Raceday, which we are affectionately calling “Buggy 100” (#Buggy100), takes place on April 16-18, 2020, so make sure you’ve got the dates marked on your calendar.

As part of our big push to celebrate the Buggy Centennial this year, we are diving extra deep into our history.  While the “History” tab of our site may give you the winners and their times, this year we wanted to take a more in depth look at the past 100 years of Buggy History at Carnegie Mellon. So with that said, we are introducing the “100 Years of Buggy History” series, which will run weekly (roughly) on the cmubuggy.org site.  We’ll not only give you winners and times, but where possible, we’ll go into more detail about each year of Buggy.  That includes information about Raceday – the weather, the crowds, the heats, the incidents, and the excitement – as well as any other interesting Buggy-related storylines that popped up over the course of the school year.  We’ll also be loading up these posts with whatever photos, videos or other juicy gossip we can get our hands on from each of those years.

I doubt any of you were around for the early years (someone who participated in 1920 would be 117 years old today, and it turns out that as of today, the oldest living person is only 116).  But if you have any interesting stories from the years of Buggy that you were around for, or if you know people (especially people like parents or grandparents, who may have participated in the early years) who have told you stories from their day, please let us know – you can email me at bryan.arsham@cmubuggy.org!  We’d love to include that stuff.

The information that we put into this series is sourced from whatever records that we can get our hands on from the various years.  Other than any stories we get from you all, the vast majority of this information comes from the excellent archives of the Carnegie Mellon University Libraries Digital Collections, with a significant percentage coming from The Tartan (other sources include the Thistle, the CIT Alumnus, and various Pittsburgh-area newspapers).  But with that comes a couple of caveats, that I wanted to get out of the way now.

The number of years covered in each post will vary a bit based on how much information we have about the given year, but as of now, the plan is that most posts will cover roughly 5 years (give or take).  We will also use today’s terminology (for example: CMU, rather than CIT, to refer to the school) as appropriate to make the history as understandable as possible for today’s readers.

So without further ado, let’s kick off the 100 Years of Buggy History series with the origins of Buggy: 1920.

1920 used to be our White Whale.  We knew that Buggy began in 1920, but the results, and information about the races, were lost to history.  That is, until our own BAA Vice President Jeremy Tuttle went digging a little more, and discovered the June 1920 CIT Alumnus.  The CIT Alumnus was a (mostly) bimonthly alumni newsletter published until roughly 1982, and although it did not regularly cover Buggy, there were some important historical references in those early years.  So, what do we know about 1920 – the first year of Buggy?