Despite a late start again (due to a radio club delay), buggies made it around the course! Pretty crazy day however, if you ask me… https://cmubuggy.smugmug.com/2021-2022/Fall-Rolls-Oct-2

During the second roll through the other two maladies hit the course at the same time: dense fog and a pack of hungry geese.

SDC was the first team to face this one two punch of terror. Bane came down the course without issue but unbeknownst to SDC, their buggy wouldn’t be the only Havoc on this roll. As the sinister green buggy raced through the fog towards the transition, the geese went rogue. Three of These Canadian mischief makers leapt off the monument and charged into the driver’s line, intent on bringing Havoc upon Havoc. Luckily the driver cruised to a safe stop before entering the octagon with the long necked, winged beasts.

The following driver in vanity was not spared from the blood curling fiends as she too had to scream to a halt, coming a bit close to havoc for comfort. The three waddling warriors were left to waddle across the street, then rolls were reset and Spirit was clear.

But the honking hounds were not yet finished with their horrifying plot. As Zuke thundered through the thickening Pittsburgh fog the geese attacked yet again, hurtling themselves off the monument into the road. She safely stopped to the right of the monument, as did the following buggy, sending the pack of geese into honks of victory. About this time a brave team of warriors was assembled. With weapons (brooms) high and adrenaline pumping, The crew swept in. Our heroes began the battle by brushing back the geese from their stronghold on the monument. Now on the streets, the geese were consolidated into a big “dust pile” where chaos ensued. Wings and feathers filled the air as the outmanned humans pushed valiantly to sweep the down filled demons back. Eventually a surrender was negotiated, with the ghastly geese hissing in rage at their embarrassing defeat as they sauntered deep into Phipps lawn

Unfortunately, once the issue of birds that shall not be named was handled, a dense cloud descended upon the course, rendering vision to a minimum. A hold was placed on rolls as no mere mortal can battle with the fearsome fog and come out alive. Our gladiators hung their heads in defeat, knowing Mother Nature had almighty power far beyond what they showed in The Battle on the Monument.

(thank you connor for that descriptive and entertaining writeup)

Now onto our regularly scheduled programming:

All buggies got three rolls, no issues! New drivers in Solaris and Molotov graduated to bag less rolls with full push offs and handled it admirably. 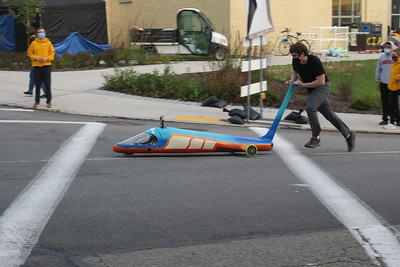 four buggies, two rolls each. Lots of people. Nothing exciting (which is a good thing on this day)

Two rolls each for Baltic and Bumper. Blind Faith (new driver) had two controlled stops— one for visibility issues due to fog and one for generally figuring out driver lines.
Last roll of the day she seemed to get lost around the transition but continued down. She seemingly recovered and continued down towards the turn at a very slow rate of speed. She either missed the chute flag or got confused and continued towards the barricade. Luckily, the very aware barricader moved into action and stopped the buggy just before it rolled under a car he had just stopped that had snuck through outer barricade. MVP of the weekend.

Havoc was back for SDC for the first time since 2016. They were fast and smooth the whole day save for being one of the teams to stop for geese (see above).

Kraken got one roll, Barracuda rolled once but had a controlled stop due to visibility issues caused by road bumpiness

All buggies got two rolls, controlled stops from Zuke and Seraph on second roll because of ADDITIONAL GEESE (see above).

Anyone who submitted photos on the google drive link!